The fracturing technology is an important stimulation measure for the development of compact layers in the oil field. It opens the channels of the rocks and allow the oil to flow through. The fracturing fluid cross-linked by polyacrylamide is widely used because of its advantages of high viscosity, low frictional resistance, good sand-suspending ability, convenient preparation and low cost.

The hydraulic fracturing process in the oil layer is based on a high-pressure, large-displacement pump on the ground. With the principle of liquid pressure transfer, a liquid with a certain viscosity (commonly referred to as fracturing fluid) is injected to the oil layer at a pressure larger than that of the oil layer. The pump also increase the pressure from the bottom of the wellbore. When this pressure is higher than the crustal stress near the borehole wall and the tensile strength of the formation rock, cracks will occur near the bottom of the wellbore. With the continuously injection of sand-carrying fluid, the crack extends forward and is filled with proppant. After the well is shut, the fracture is closed on the proppant, thereby forming a sand-filled crack with a certain geometric size and high conductivity in the stratum near the bottom of the well. It is the purpose of the oil well to increase production and increase injection. The proppant is also called fracturing fluid. 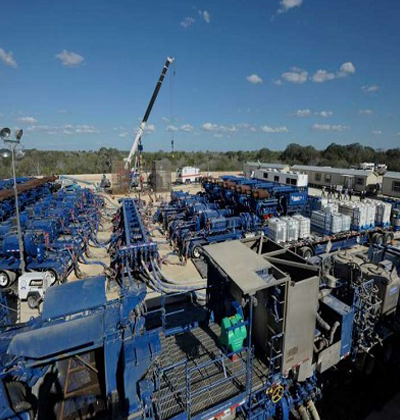