Polymer is a substance that greatly increases the viscosity of the liquid which mixed with this polymer and water. Polymer flooding is mainly to use polymer to increase the viscosity of injected water, reduce the ratio of oil to water flow, and increase sweep efficiency. Firstly, from the rheology of the polymer, it can be seen that the viscosity of the water increases significantly after adding the polymer, and the higher concentration of the polymer, the stronger of the viscosity. In addition, when the rock surface is hydrophilic, the polymer is easily adsorbed on the surface. When the injected water passes through the surface of the adsorbent layer, the thin film of the adsorbent layer expands, thereby reducing the effective permeability of the aqueous phase. When the oil comes into contact with the adsorbent layer, no swelling will occur. Therefore, in oil layers with very low oil saturation, the use of polymers can significantly reduce the flow of water, increase the sweep efficiency, and improve oil recovery. 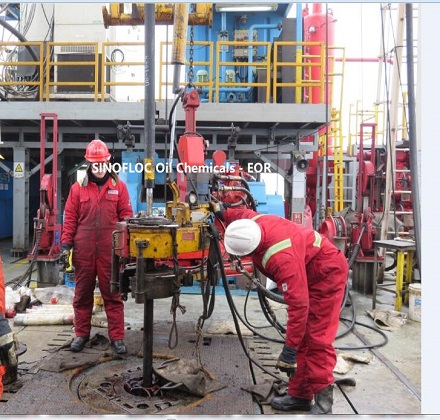